About the Publisher – Jan Girand 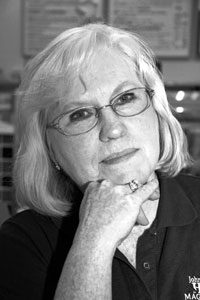 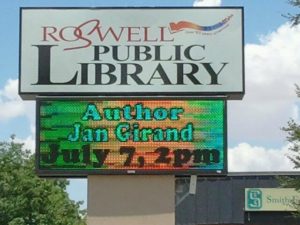 Jan Girand lives with her husband, Dan, in Roswell. Countless generations of her mother’s family have lived, in continuity, in northern New Mexico. Two lines, both parents of her great-great-grandmother, have been traced back to Onate’s 1595 expedition into New Mexico.

Jan: Was a newspaper reporter; published in the New Mexico Magazine; published a non-fiction book; produced and wrote many articles for five annual issues of a history magazine, the Outlaw Gazette; and owns and publishes a long-term Internet magazine. She is also owner and editor of a small publishing company, YellowJacketPress.

Jan is particularly interested in regional history. She is the producer and editor of PastWord, a publication covering characters and events of New Mexico’s eighteen hundreds. She hopes it will eventually become an annual publication. She also researched, compiled, wrote and edited, with multiple contributors, a family history book–Laumbachs in New Mexico and Those Who Went Before in Germany, Iowa and New Mexico–which includes considerable regional histories, mostly of the 1800s. She also has in progress two additional family history books that will complete a trilogy; those remaining two non-fiction books are more than halfway completed. All three include copies of actual vintage transcripts of court cases.

YellowJacketPress is located in Roswell, New Mexico. First, let’s get this stuff out of the way:

New Mexico is one of the 50 United States of America, not a foreign country south of the U.S. border. And yes, we mostly speak English here.

Yes, this is the same Roswell known for aliens of the green or gray outer-space variety. Yes, this is the same Roswell internationally known for a saucer crash with aliens, although that crash did not happen at Roswell. It allegedly happened on the San Augustin Plains near Las Cruces, New Mexico. Another crash, or more likely, debris originating from that saucer that crashed at St. Augustine, landed in a rancher’s pasture near Corona, more than 100 miles northwest of Roswell. (That’s like an airplane’s wing or propeller falling off and landing miles before the plane crashed when traveling at a high rate of speed.)

So, you ask, how did Roswell become known as THE setting for those incidents from outer space when neither actually happened at Roswell? Supposedly crash debris and alien bodies were taken by the military from one or two of those accident scenes to their Roswell Air Field (RAF) base south of Roswell. There, first the U.S. military themselves announced they had flying saucer debris. Then the government retracted that statement and denied that debris was an out-of-this-world substance. It’s been denying it was of an alien origin ever since.

The world, along with many Americans, love to bash the U.S. government, enjoy conspiracies and unsolved mysteries. Besides, this media exposure has been good for the economy of Roswell, New Mexico. Do most Roswellites believe in aliens? Quien sabe?

About that other misunderstanding: Except for a local store using the name, Area 51 is not in Roswell or New Mexico; that top secret government facility is in Nevada. So how did Area 51 become associated with Roswell? Supposedly the alien’s bodies from the San Augustin Plains crash site were flown, from the RAF base by stealth of night, to Area 51 in Nevada for further scientific study. And–you guessed it–the government has denied that too.

Contact me by email. We can enter into a discussion to mutually decide whether YellowJacketPress is the right publisher for you. YellowJacketPress will accept one or two new outsourced book projects a year. We already have some under consideration. Unsolicited manuscripts are not accepted. 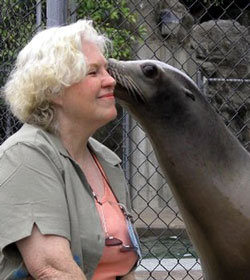 In 2004, upon her arrival for a visit with her brother and his wife in Oregon, Jan had a prearranged date for a kiss by Lea–a special, unique treat they gave her. With Lea’s cold dripping whiskers, fishy breath and wet lips pressed to Jan’s cheek, her eyes looked back to her trainer as if asking, “Am I doing this the way you want?” When Lea was pleased with herself, she clapped her flippers and loudly barked, “Arf! Arf! Arf!”

Lea is a California sea lion at the Oregon Coast Aquarium at Newport. Male sea lions weigh up to 860 pounds; females like Lea weigh up to 250 pounds and are about five feet long. They have small heads and large torpedo-shaped bodies with milk-chocolate color fur. 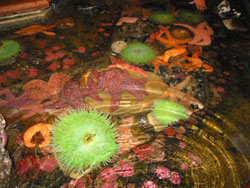 Colorful sea anemones at the Oregon Coast Aquarium at Newport 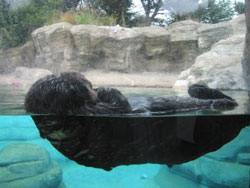 Little sea otter rocked to sleep in his water cradle